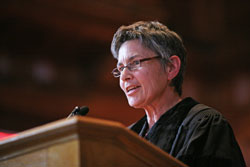 There are two kinds of explorers in the world—the armchair kind and the arm-wrestling kind. You are most certainly the latter. The first known woman to cross the ice to the North Pole; leader of the first all-women expedition to cross the ice to the South Pole; with a partner, the first women to ski and sail across the Antarctic landmass, you have reached your goals by overcoming endless obstacles—not just physical ones but those presented by age-old misperceptions of the limits of female vigor and endurance. Once a traditional teacher, you have used lesson plans and the Internet to engage with your expeditions students from around the world—teaching them about science and about climate change, and motivating them, especially girls and young women, to imagine in unfettered ways their own futures, with confidence in their ability to overcome whatever might lie in their way. Expeditions, you have said, are in fact metaphors for much of what goes on in the classroom. So great has been your inspiration that you have been inducted into the National Women’s Hall of Fame, cited as one of the Remarkable Women of the Twentieth Century, and named Woman of the Year by “Glamour” and “Ms.” Your most powerful legacy, however, is still to come, as countless girls around the globe, inspired by your example, grow up to step out into uncharted territory.

I hereby declare you recipient of the honorary degree Doctor of Science, entitled to all the rights, honors, and privileges appertaining thereto.