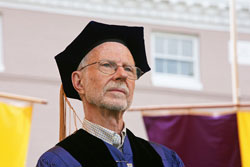 Proud son of North Adams, you have used your education at Williams, Cambridge, and Yale to become one of the most influential scholars of international politics. Pursuing knowledge both for its own sake and to help build a better world, you have sought to answer one of the most important questions of our age: What factors reduce armed conflict between states? You have done this in more than two dozen books, more than two hundred articles, and in thirty-six years of editing the Journal of Conflict Resolution. Your 1993 book, Grasping the Democratic Peace, showed that democracies almost never warred against each other. You next helped identify the peaceful effects of bilateral trade, and then, as a less powerful but still measurable force, the role of joint membership in international bodies. Democracy, trade, international organizations. No one’s work in conflict studies has been cited more than this, having spawned what has been called a “cottage industry of analytical studies.” This is scholarship held up as a model for being led by hypothesis, based on data (in this case the experience of states around the world over many decades), and open for debate and replication. Admired well outside the academy, you were also recruited to staff the Ford Foundation report on The United Nations in Its Second Half Century and as principal advisor to the U.S. Roman Catholic bishops in the writing of their pastoral letter on nuclear weapons.

I hereby declare you recipient of the honorary degree Doctor of Letters, entitled to all the rights, honors, and privileges appertaining thereto.

Please visit the Covid-19 website for the latest information, including details about vaccination, testing and mask requirements, and policies for off-campus visitors.