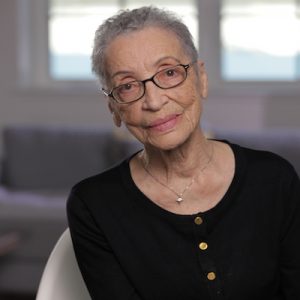 Betty Reid Soskin is a civil rights advocate and recently retired ranger with the National Park Service’s Rosie the Riveter/World War II Home Front National Historical Park in Richmond, Calif., which honors the contributions women made to the war effort. Throughout her life, Soskin has fought against racism and discrimination. In 1945 she co-founded Reid’s Records in Berkeley, Calif. One of the first Black-owned record shops in California, Reid’s was dedicated to supporting African American music and became especially influential in supporting gospel musicians. Soskin eventually took over management of the store, which led to her becoming engaged in area civic matters and a prominent community activist as well as a songwriter in the civil rights movement. She also became involved in the Mount Diablo Unitarian Universalist Church and the Black Caucus of the Unitarian Universalist Association. Soskin later served as a field representative for California State Assembly members Dion Aroner and Loni Hancock, becoming active in the early planning stages and development of the national park where she currently works. At age 100, she is the oldest National Park Ranger serving the U.S. In addition to conducting park tours, she is an interpreter, explaining the park’s purpose, history, various sites and museum collections to visitors. She is also celebrated for raising awareness of the African American wartime experience in the park’s history. In 2018, she released a memoir, Sign My Name to Freedom, chronicling her life’s journey through American history.