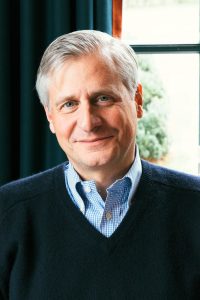 Throughout his multifaceted career as a prizewinning journalist, presidential historian and essayist, Jon Meacham has helped foster a national vision of Americans’ shared history and destiny—one that appeals to our better angels. The former Newsweek editor is the author of an impressive series of respected and bestselling biographies of American leaders, including the late Congressman John Lewis and Presidents George H.W. Bush, Franklin D. Roosevelt and Thomas Jefferson. His biography of President Andrew Jackson, titled American Lion: Andrew Jackson in the White House, was awarded the 2009 Pulitzer Prize for biography, for its “unlikely portrait of a not always admirable democrat, but a pivotal president, written with an agile prose that brings the Jackson saga to life.” A versatile scholar and thinker, Meacham has also explored broad themes in such works as The Soul of America: The Battle for Our Better Angels and American Gospel: God, the Founding Fathers, and the Making of a Nation. He currently serves as the Carolyn T. and Robert M. Rogers Chair in the American Presidency at Vanderbilt University, a contributing writer to The New York Times Book Review and a contributing editor of TIME. He has also written for the Times op-ed page, The Washington Post and Vanity Fair, among other publications, and he has been a regular guest on Morning Joe, the MSNBC daily news and talk program co-hosted by Williams alumna Mika Brzezinski ’89.