Cory A. Booker, Doctor of Laws 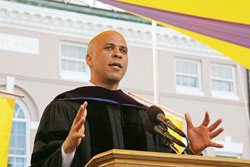 Funny, you don’t look like a frontiersman. Yet that is indeed what you are, struggling to bring prosperity to America’s most challenging territory—its cities—and in your case, Newark, perceived by some as Death Valley, but to you a fertile land hidden beneath sands of neglect. When you rode into town, while still a Yale Law student, people wondered, “Who is this guy?” But no one asks that anymore, not after you have lived for years in a public housing project, won a seat on the City Council, got yourself elected mayor, patrolled with police each night until four a.m., lived for a time in a motor home on the street corners with the most drug traffic, added surveillance cameras, formed the Prisoner Reentry Initiative and the Fatherhood Center, reduced the rates of murder and robbery by more than forty percent, raised more than one hundred million private dollars for schools, doubled affordable housing, and, along the way, managed to slash the budget deficit. Not bad. In time, rivulets began to appear, which have now grown into streams of new life. Population is growing, urban pioneers have followed your lead, and Newark is now known as a city of innovation, a city of ideas, and a city that has become cool without displacing its long-time residents. Many having done all this would have ridden into the sunset, but you have chosen instead to remain, committed to seeing the job done.

I hereby declare you recipient of the honorary degree Doctor of Laws, entitled to all the rights, honors, and privileges appertaining thereto.