No artist has ever given more of herself. Beginning in your native Yugoslavia and now around the globe, you have sacrificed your body in feats of staggering physical and mental endurance—exploring, at the cost of great pain, the limits of human capacity, consciousness, and art. These vulnerable performances of physical and emotional danger have produced in audiences moments of intensely focused presence, as a kind of medicine for our distracted age. Forty years of this pioneering work led to last year’s retrospective at the Museum of Modern Art. As its centerpiece, called “The Artist is Present,” you sat and looked silently into the eyes of a series of volunteers for seven hundred thirty-six hours and thirty minutes. The effect surprised even you. Those you sat with and those who watched were transfixed. Word spread. Some days, ten thousand lined up for the dozen or so slots. The rest watched, or sat with each other. A worldwide community engaged online. Those able to sit with you several times formed a club that still meets regularly to share the experience. There is a blog of many faces and voices with the title “Marina Abramovic Made Me Cry.” Now, as the self-described grandmother of performance art, you give yourself also to the form’s cultivation and preservation—establishing protocols for its capture and re-performance so that such audience experiences can remain forever present. 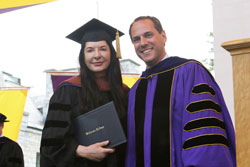 President Maud S. Mandel has announced plans for the fall 2020 semester. More details here. Please note that all Williams College buildings are closed to the public until further notice.