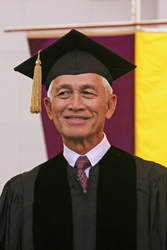 Like almost all graduates of our Center for Development Economics over what is now its fifty-year history, you left this Commencement stage to return to your country and a life of service. In just three years, you were elected to the Constitutional Convention, where you called for presidential term limits in the age of Ferdinand Marcos. You later served the maximum three terms in Congress, where you chaired the Committees on Rural Development and Economic Affairs, and promoted legislation to reform banking and finance, increase investment from overseas, and build competitiveness while establishing economic safety nets. As president of the government-owned Land Bank you helped focus resources on small farms and fisheries and are credited with returning the bank to its mandate and to profitability. And then, as the country’s longest-serving Finance Minister in decades, you helped lead the nation’s economy to its highest GDP growth in more than thirty years. When the publication The Banker polled economists and bankers, you were named Best Finance Minister in Asia, responsible in large part for the increased standard of living of your countrymen and women. Williams and the CDE take pride in all of these accomplishments and in your being known as refreshingly humble for so public a figure and as such an able explainer of complex issues to the public that you have so devotedly served.

I hereby declare you recipient of the honorary degree Doctor of Laws, entitled to all the rights, honors, and privileges appertaining thereto.